Despite sliding oil prices, mid-range housing holds its own

HOUSTON — (February 10, 2016) — The Houston housing market kicked off 2016 with a strong month of sales, only about 2 percent off the January record, despite the ongoing effects of strains in the energy industry. Single-family homes priced between $150,000 and $250,000 saw year-over-year sales increase by nearly 9 percent while total property sales remained unchanged.

According to the latest monthly report prepared by the Houston Association of Realtors (HAR), January single-family home sales were down 2.1 percent versus January 2015 with a total of 4,024 sales compared to 4,109 a year earlier. An increase in new listings helped buoy a growth in inventory from a 2.5-months supply to 3.3 months.

“A lot of folks have nervously anticipated that falling oil prices would have a devastating effect on real estate, but so far, the Houston market has weathered the energy downturn without dramatic shifts in sales and pricing,” said HAR Chairman Mario Arriaga with First Group. “The most noticeable impact has been declines in the luxury market, but mid-range housing actually saw a healthy sales volume in January and inventory levels grew. HAR will continue to closely monitor the economic climate.”

In the February edition of The Economy at a Glance, the Greater Houston Partnership (GHP) reports that 23,200 jobs were added across the Houston metropolitan area in 2015, an increase of less than one percent, according to the Texas Workforce Commission. GHP is forecasting the creation of approximately 22,000 jobs in 2016.

In January, the single-family home average price eked out a fractional 0.3 percent year-over-year increase, reaching $262,663 while the median price—the figure at which half of the homes sold for more and half sold for less—rose 5.3 percent to $200,000. Both figures represent all-time highs for a January in Houston.

Month-end pending sales for single-family homes totaled 5,714. That is up 9.1 percent compared to last year. Total active listings, or the total number of available properties, at the end of January rose 15.8 percent from January 2015 to 32,260.

* Months inventory estimates the number of months it will take to deplete current active inventory based on the prior 12 months sales activity. This figure is representative of the single-family homes market.
** Effective May 2015, in an effort to be consistent with industry standards, the Houston MLS is now including all categories of pending sales in its reporting. Previously, the Houston MLS did not include “option pending” and “pending continue to show” listings in its reporting of pending sales. The new methodology is now all-inclusive for listings that went under contract during the month. 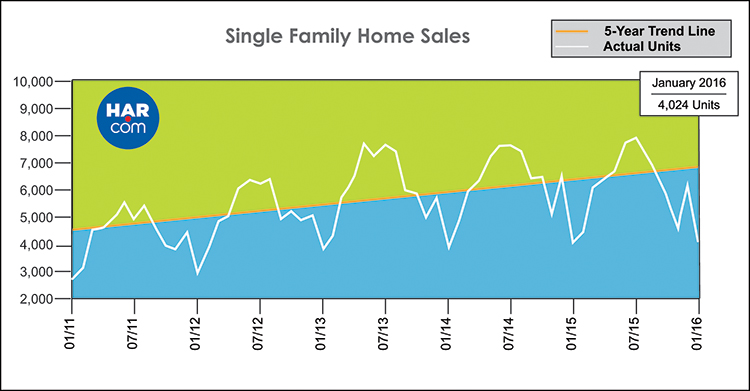 Broken out by housing segment, January sales performed as follows: 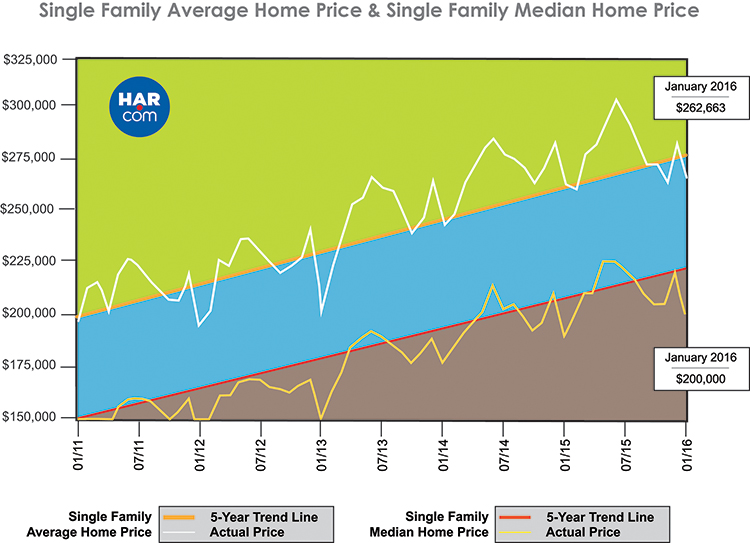 HAR also breaks out the sales figures for existing single-family homes. Existing home sales totaled 3,403 in January, down 1.6 percent versus the same month last year. The average sales price rose less than 1 percent year-over-year to $246,019 while the median sales price climbed 6.7 percent to $186,690.

The computerized Multiple Listing Service of the Houston Association of REALTORS® includes residential properties and new homes listed by 32,000 REALTORS® throughout Harris, Fort Bend and Montgomery counties, as well as parts of Brazoria, Galveston, Waller and Wharton counties. Residential home sales statistics as well as listing information for more than 50,000 properties may be found on the Internet at http://www.har.com.

The MLS does not verify the information provided and disclaims any responsibility for its accuracy. All data is preliminary and subject to change. Monthly sales figures reported since November 1998 includes a statistical estimation to account for late entries. Twelve-month totals may vary from actual end-of-year figures. (Single-family detached homes were broken out separately in monthly figures beginning February 1988.)

Founded in 1918, the Houston Association of REALTORS® (HAR) is a 32,000-member organization of real estate professionals engaged in every aspect of the industry, including residential and commercial sales and leasing, appraisal, property management and counseling. It is the largest individual dues-paying membership trade association in Houston as well as the second largest local association/board of REALTORS® in the United States.